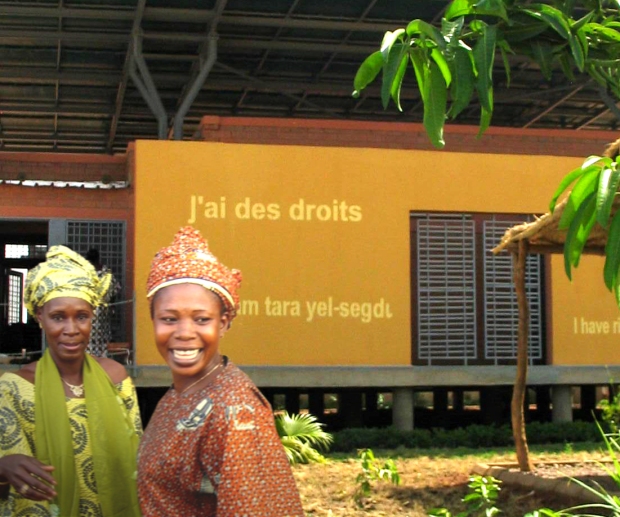 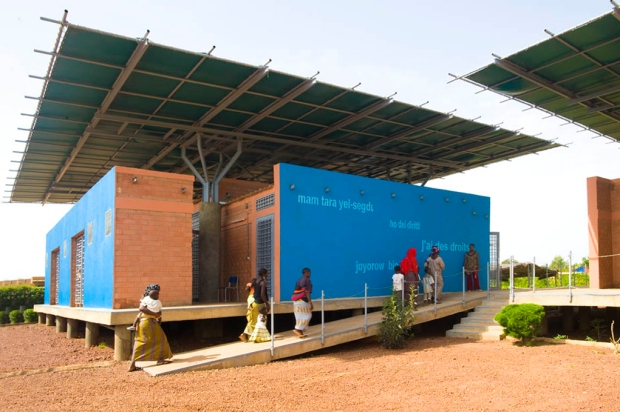 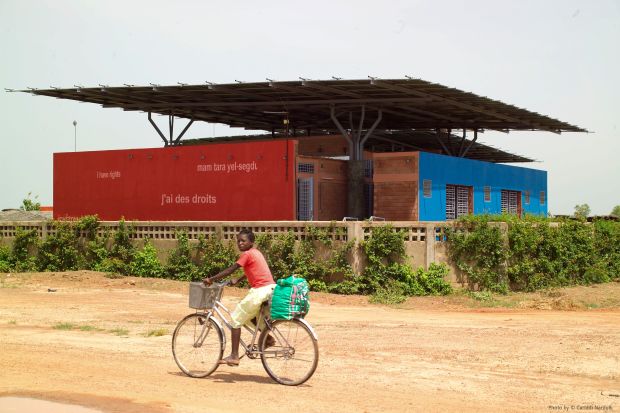 The project, realised in a 1,600 sq/m site donated to AIDOS by Ouagadougou’s Municipal Government, is based on the separation of the primary activities performed by the CBF into two distinct, though closely related buildings: a Training Centre (dedicated to activities of awareness-building and the administration and management of the CBF) and a Consultancy Centre (used for medical visits, legal assistance and psychological counselling). The centre services more than 4500 clients annually. The initial design was developed prior to the definition of the project site and at a time when the office possessed very little technical information about locally available technologies and materials.

As a consequence the early stages of the project were approached as a ‘work in progress’: a typological model with some clearly defined architectonic characteristics derived from climatic, environmental, technical and economic considerations and flexible and adaptable to any possible site. The two main buildings are set on top of a raised platform creating a plane that supports various buildings used for different purposes. The raising of the platform above the ground ensures protection against dust, mud and humidity. 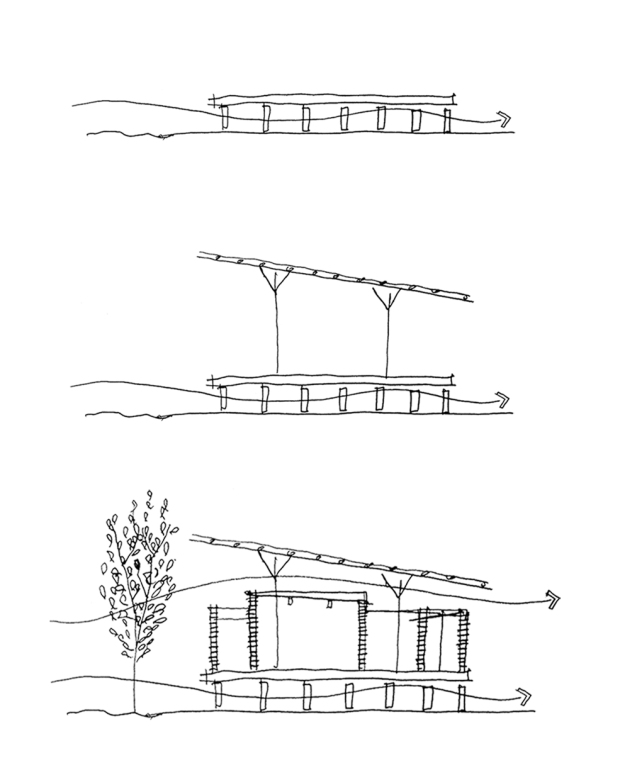 The two main buildings are protected against rainfall and direct sunshine by a lightweight waterproof recyclable PVC cover supported by an independent structure of steel ‘trees’. This is part of a system that collects and stores rainwater to irrigate the garden. The volumes containing the various rooms are independent of the roof structure and articulated around a series of shaded and ventilated patios that ensure privacy from the exterior. The modular configuration of the structure allows for future expansion, while preserving the general framework of the building. The building walls are constructed using compressed dry stacked BTC (briques en terre comprimée) clay bricks made on site using a rough mixture of earth, cement and water. The making of these sun-baked bricks consumed no additional energy, limiting the environmental impact of the entire intervention.

The buildings are covered by corrugated aluminium and translucent decking that allows natural light to filter into the interior, reducing the need for artificial illumination. 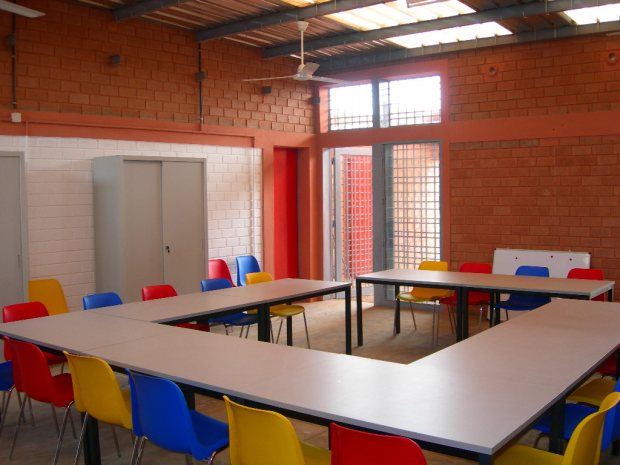 The space between the steel roof and the velarium, the open cavity beneath the platform, together with the exterior openings fitted with operable glass fins, all help to improve the natural ventilation of interior spaces and drastically reduce the need for mechanical air conditioning. 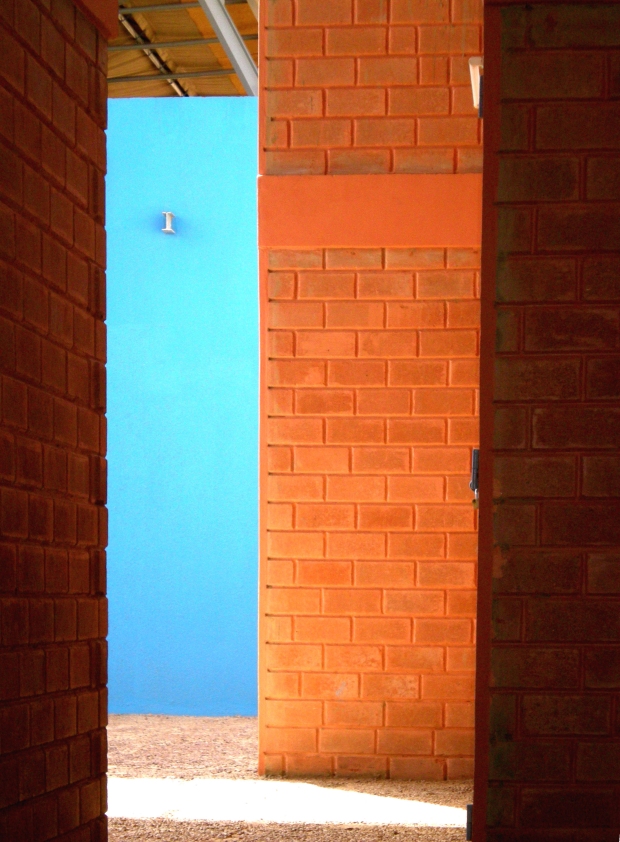 The exterior space, similar to the interior, is designed as an open area to be used by the entire community. It is a space of sharing and of information used to present the themes dealt with by the CBF. Indirect and informal communication is also favoured by the organisation of small events and public discussions. 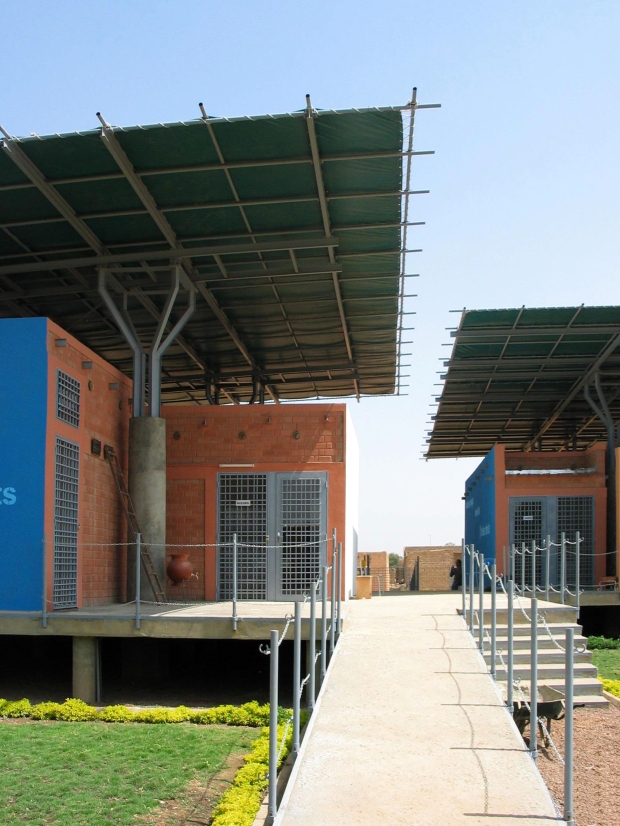 The garden is a micro environment that surrounds the structure and takes advantage of the shade provided by the building and trees and the humidity produced by the plants. A grass layer reduces the effects of erosion, while various species from Western and Sub-Saharan Africa have been planted with the intention of creating shade as well as promoting the return of indigenous vegetation. 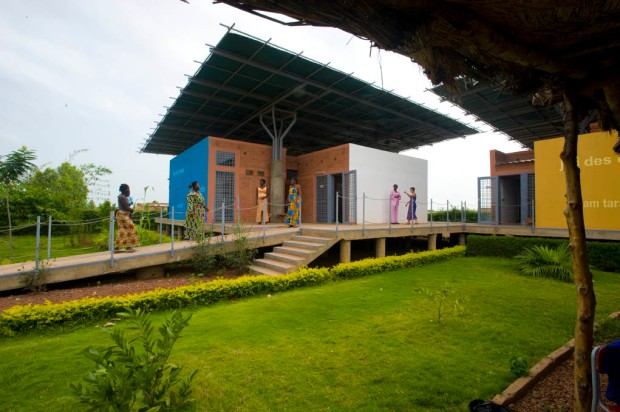 Given the lack of water and power in the area, the Centre is fully independent. Integrated systems for the systematic control of energy consumption are accompanied by energy self-production, using largely renewable resources, water is provided by a newly drilled and dedicated well and photovoltaic cells have been installed along the perimeter wall, reducing the use of the electrical generator. The outside walls, devoid of any openings, are finished in brightly painted plaster. The local NGO’s slogan, translated into 5 languages, completes the decoration of the walls, turning the entire building into a large canvas that broadcasts the structure’s social objectives in an informal manner. 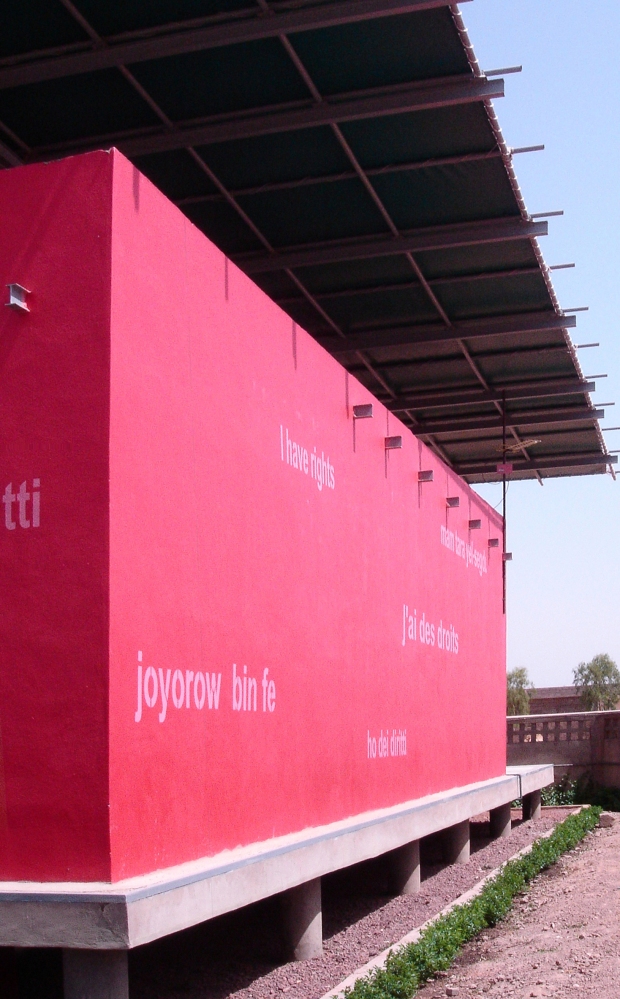 The CBF is the first ‘real’ building to be constructed in Sector 27, one of the poorest suburbs in Ouagadougou, Burkina Faso. This semi-rural area is defined by a multitude of small, spontaneously constructed mud huts and entirely devoid of any planning regulations or basic infrastructures. Since its completion the CBF has become a focal point for the rapid development of numerous new activities. Moreover, the strong architectural identity of the new building has rendered the neighbourhood interesting and attractive to local authorities, the international media and, as a consequence, possible donors and social operators. The first direct effects of the suburb’s newly acquired visibility can be seen in the Municipality’s decision to build a new road; the creation of electrical and water supply connections; the construction of a new maternity clinic and the donation of a once empty field to women living in Sector 27 for use as an income generating self-cultivated vegetable garden. 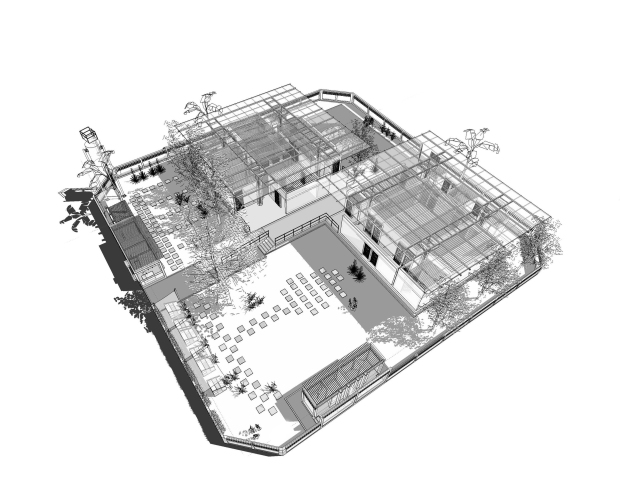 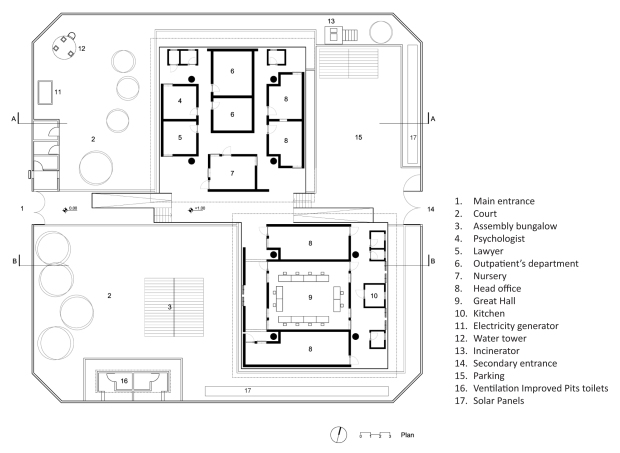 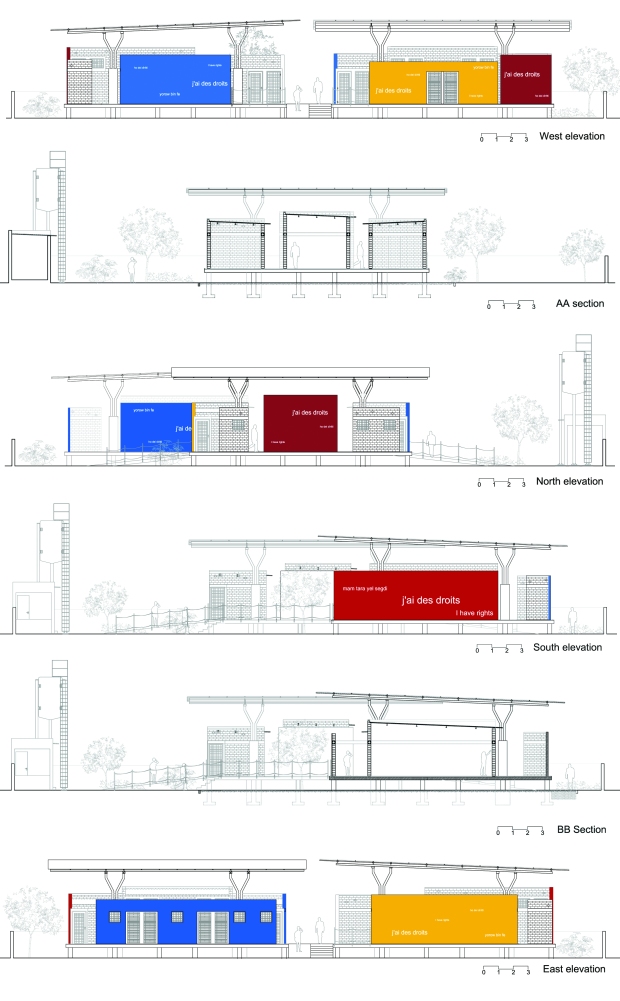 “while dealing with this project we had to re-think all our intellectual and technical habits…everything was different…even logical processes worked differently between us, you can imagine … but the challenge was not to fall into the ‘poor africans’ stereotype and try to learn from each other a different and possibly better way of conceiving architecture there … amazing …” (Erika Trabucco, FAREstudio) 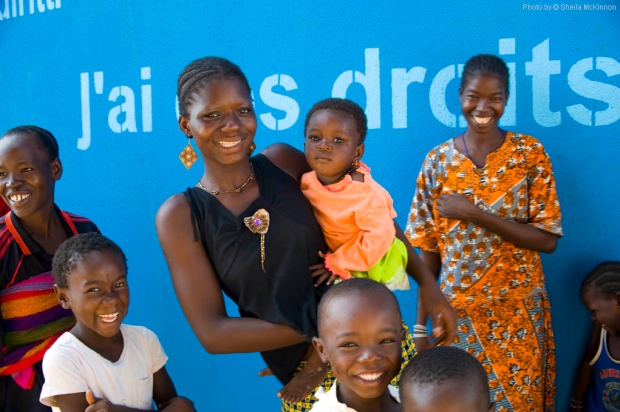